Privateers of the Imperium

“The armchair-admirals at the Navy academies will have it that combat in space is a predictable, scientific affair, akin to a game of regicide.
They teach that you should only engage your enemy at this or that range, that it takes a particular number of escorts to engage one cruiser and a hundred other such nuggets of tedious, received wisdom.
What do they know? These academics and experts who have never felt the rush of blood as you close on your foe, his plasma containment failing as he bleeds out into the void? Who among them has closed to ranges that make the ‘experts’ splutter with indignation? Which of them know the visceral thrill that is the bloody murder of combat in space?
I have felt the frozen kiss of the void as my hull split, and lived. I have hurled my warship at my foe as if it were a torpedo, and defeated him utterly. And I will do so again, a thousand times, until the Emperor or the universe decides I’ve done it once too often.”

–Rogue Trader Lucien Gherrit of the Clan Arcadius, at the victory banquet aboard the Wotan following the defeat of the traitor 88th Flotilla.

The Imperium is a vast, scattered realm, extending over almost the entire galaxy, impinging itself upon the more compact areas of alien settled space. The million or more inhabited worlds the Imperium controls are but a tiny fraction of the galactic whole. Then there are the fringes and halo zones, remote areas where the Astronomican does not reach, and where the only human settlers are renegades or pioneering groups whose ancestors were forgotten millennia ago. Most of the galaxy remains unexplored, unknown, and extremely dangerous.

The potential of new worlds, alien civilisations, and unimaginable resources made necessary a class of free-ranging Imperial agents known as Rogue Traders. Licensed and often equipped by the Adeptus Terra, the Rogue Trader is free to explore the far regions of the galaxy, the areas where the Astronomican does not reach, and those areas within its reach as yet unvisited.
Rogue Traders have even attempted to cross the voids of interstellar space, but over such distances even the Astropaths’ powers of communication are useless, and whether such missions have succeeded is unknown. Operating in isolation from the central authority of the Imperium, the Rogue Trader must decide how to react to alien cultures, new discoveries, and threats. If he judges a race to be potentially dangerous, he may attempt to destroy it or to gather as much information as he can so that others may do so.
If he decides a race may be of use to humanity, he may attempt to make contact and establish relations. If merely rich in technology or minerals, a planet may be plundered, and the Rogue Trader will return to Terra laden with the treasure of space—alien artefacts, rare and precious minerals, and undreamed of technology.

Needless to say, the Rogue Trader requires a considerable resource in spacecraft, troops and other staff if he is to complete his mission. His total responsibility may extend to dozens of spacecraft, often huge, lumbering cargo vessels crammed with a small army, a full crew of technicians, and volunteer settlers to establish colonies on new worlds. Most important, however, are the fighting troops, for it is they who will have to deal with any potential threat.

Rogue Traders have a reputation as outcasts; many are people whom the priesthood deems better kept at a safe distance. Operating beyond Imperial control, Rogue Traders are a law unto themselves. Some are highly pious individuals, bringing the Emperor’s light beyond His rule; others are nothing more than glorified pirates and scoundrels.
Many Rogue Traders exude confidence and are highly charismatic, often charmingand roguish, skilled diplomats (some would say confidence tricksters) and hardened killers when the situation demands. Rogue Traders will often gather an entourage of hangers-on and companions, and this may contain alien warriors, mutants, and other undesirables.
Many in the Inquisition would take to marking the Rogue Trader out as a heretic. Many Rogue Traders have highly unstable personalities—some destroy worlds on a whim or experiment with alien species out of macabre curiosity. 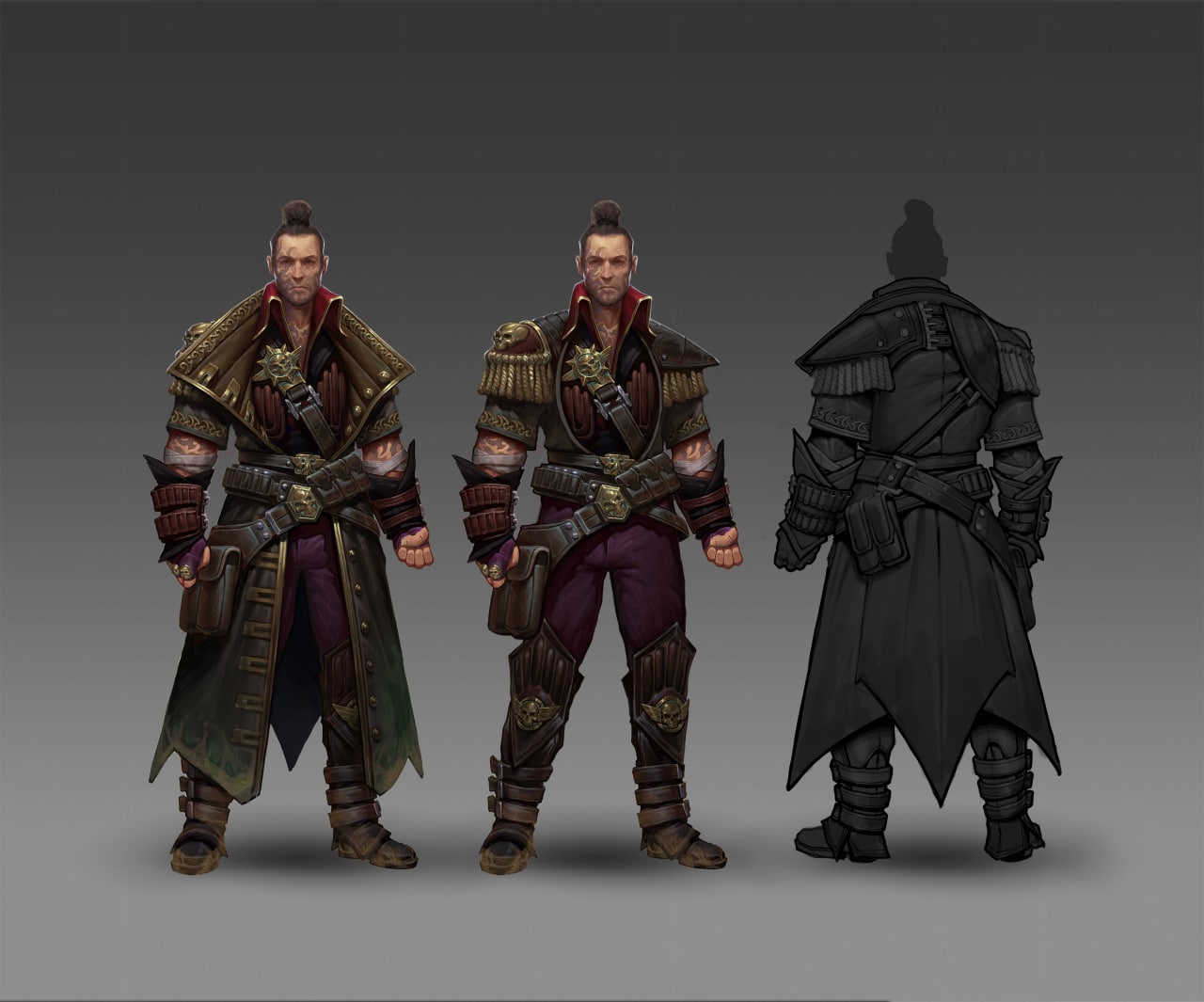 Rogue Traders usually return to Imperial space every few years, to unload their exotic wares and re-supply, recruit, and rest until the next foray into the darkness. During these periods they may come into conflict with members of the Adeptus Terra or the Inquisition.
Rogue Traders wield incredible power, and it is easy for them to forget that once back within the Imperium, they do not have free rein to act as they wish. This strident attitude will draw attention from the authorities.
Many Rogue Traders dispute the right of the Imperium to exercise authority over them. As men who have wandered amongst alien stars and conversed with all manner of cultures, Rogue Traders are viewed as susceptible to all kinds of heresies, from wayward philosophies to infection by alien creatures or possession by warp entities that live in the darkness between stars.
All of these factors can lead to violent confrontation, particularly if the Rogue Trader has knowledge or an artefact that others covet.

The Warrant of Trade

By dint of the fact that the vast majority of space travel is tightly controlled by the Segmentum Fortresses, the Imperium is able to impose a great degree of control over the movement of its subjects. The Imperium being spread out across such a vast region of the galaxy, it lacks discrete borders and is defined more by the warp routes that connect individual sectors.
On the fringes of Wilderness Space, the populations of isolated or neglected worlds do interact with alien cultures, trading with them or taking up common cause against a mutual foe. For the most part, however, humanity is fearful and untrusting of the alien and non-Imperial cultures, taught from birth that Mankind is possessed of a manifest destiny to rule the stars, and that contact with outsiders brings at best moral pollution, and at worst world-razing devastation.
Contact with proscribed cultures is therefore forbidden, by ancient decree, to be undertaken only at the very highest levels as sanctioned by the High Lords of Terra and their duly appointed servants.

Despite the general prohibition against dealings beyond the Imperium, the High Lords of Terra long ago recognised the value of expanding the borders of Humanity’s domains. The Warrant of Trade issued to all Rogue Traders grants not only the permission to go beyond the Imperium’s borders, but to deal with who or whatever might be out there with the fullauthority of the Senatorum Imperialis, the High Lords.

The Warrant also elevates the recipient to the highest of ranks to which a servant may rise, granting him equivalent status with such men and women as Imperial Commanders, Inquisitors and Space Marine Chapter Masters. They are granted the power to deal with such peers of the Imperium as equals, and the Warrant allowing them to call upon what aid they can negotiate.
While the Warrant of Trade confers upon its bearer tremendous privileges, it is when the Rogue Trader passes beyond the borders of the Imperium that the true power of the Warrant becomes manifest. Within the Imperium, Rogue Traders move within the established power structures of the Imperium. Outside of the Imperium, Rogue Traders define those structures themselves.
Indeed, it has been said that the Rogue Trader speaks with the authority of the Emperor Himself beyond the Fringes. Furthermore, the Warrant of Trade grants enormous rights to the recipient, allowing him to claim by conquest whatever worlds and privileges he may obtain in whatever manner he wishes to do so. 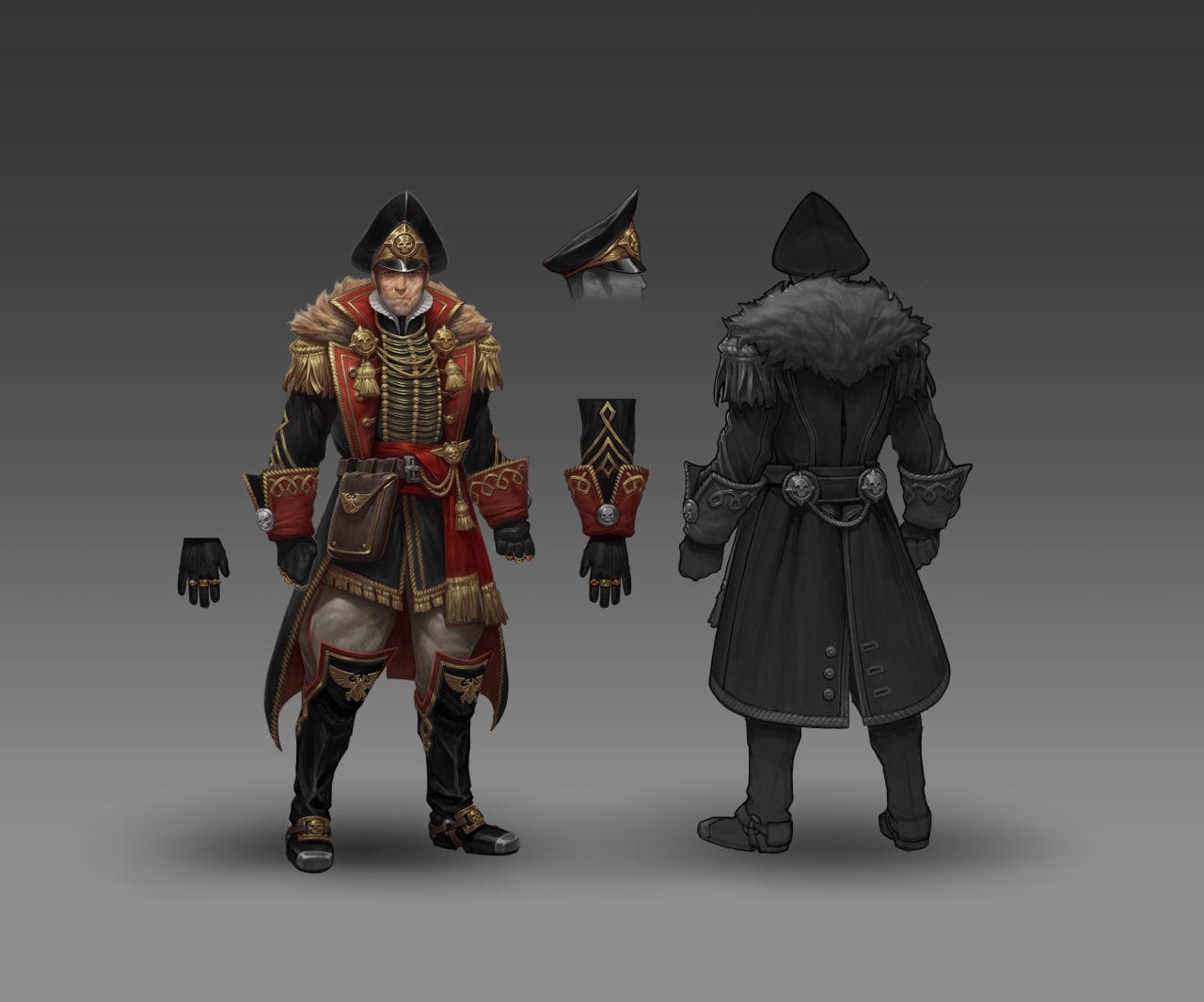 Quite aside from the financial gain, many Rogue Traders seek the fame and glory success can bring. Few men in the 41st millennium can ever hope that their name will be spoken of beyond the limits of their birth world or the span of their own lifetime. For many, the most valuable reward is the opportunity to establish a lineage, with themselves as the primogenitors, of a noble house that will endure throughout the ages