"One cannot consider the fate of a single man, nor ten, nor a hundred, nor a thousand. Billions will live or die by our actions here, and we have not the luxury to count the cost.”

As dire as the numerous threats to Mankind are, the Imperium is far from defenceless. The Emperor’s fleets possess weaponry capable of reducing the surfaces of entire worlds to ash, and the armies of the Imperium are numberless and imbued with unshakable faith in their master. These are bolstered with towering war machines that bestride the battlefields like gods of metal, and black-clad assassins able to infiltrate enemy armies by changing their bodies to mimic those of their foe. These warriors and untold more give their lives every day to stem the relentless tide of insurrection, invasion, and incursion, but there are those who occupy a unique position in the ranks of the servants of the Emperor and are feared above all others.

These are the Inquisitors — or simply the Inquisition. An Inquisitor calls no man master save the Emperor, and the Inquisition owes no fealty to any in the Adeptus Terra or beyond. The Inquisition serves in the name of the Emperor, and its origins are shrouded in the calamitous age of the Horus Heresy and its aftermath. Each Inquisitor is an individual empowered with the means, will, and authority to face any threat that might assail Mankind, whether that threat emanates from within, without, or beyond. It is within the purview of an Inquisitor to order an entire world burned, that the taint of heresy might not infect a surrounding sector, or to take command of a whole army in order to combat an enemy only he knows how to face. They alone know the truths of Mankind’s enemies and have the will to endure and fight these threats no matter the means or cost. Each knows that the only thing worse than the deeds they must commit to protect Mankind would be the outcome should they not act.

Inquisitors commonly recruit others to aid them in their duty. Most of these agents are blessed with specialized skills and abilities the Inquisitor himself does not have or cannot bring to bear at a given time and place. All are expendable, though not all realise it, as indeed the Inquisitor is too in his service to the Emperor. Each Inquisitor fights for Mankind in his own manner, with his own approach to deal with what he views as the direst of enemies. There are many concentrations of thought amongst them concerning tactics and threats. These are the Ordos, with the three largest focused on combatting one of the great threats to Mankind: the flames of the Ordo Hereticus burning the enemy within, the fist of the Ordo Xenos crushing the enemy without, and the hammer of the Ordo Malleus banishing the enemy beyond. All Inquisitors associate themselves with an Ordo; in some sectors, they might gather in mighty fortresses to issue proclamations and train successors, while in others the Ordos exist more as loose connections of shared information and assets. How each Inquisitor serves in an Ordo in his sector is as unique as the Inquisitor himself, as is how other Inquisitors might honour or impugn the actions of their fellow members.

“There is no place for the weakwilled or hesitant. Only by firm action and resolute faith will mankind survive. No sacrifice is too great. No treachery too small.”

Known and feared as the Witch Hunters, the Inquisitors of the Ordo Hereticus concern themselves primarily with combatting the enemy within, no matter the form it may take. Some are firebrands who stir up the masses in order to prosecute bloody pogroms against mutant populations. Others are masters of dogma who hunt the enemies of the Emperor not in the habways of hive cities but in the pages of texts, diatribes, and epistles. The Inquisitors of the Ordo Hereticus prosecute the enemies of Mankind within its own ranks, uncovering treachery, mutation, and witchcraft wherever it may be found. They swoop down upon entire divisions of the Adeptus Terra in search of a single scribe hiding his mutation beneath his ink-stained robes. They execute the most senior of generals for failing to eliminate a suspected psyker in his ranks. They burn cardinals of the Ecclesiarchy for allowing suspected heretical cults to flourish beneath them, twisting the Imperial Creed to the worship of the Dark Gods.

There are some amongst the ranks of the Ordo Hereticus who condemn the existence of psykers and seek to cast them into the fires of their own damnation. Other Witch Hunters are blessed with these powers and use them against their foes, believing they honour the deeds of the Emperor himself, the font of all power and the greatest psyker ever to have walked the land. Such diametrically opposed differences of opinion lead to conflict between Inquisitors; entire wars have been fought and millions slain to settle such clashes between rivals within this Ordo.

The most powerful, feared, and effective of Witch Hunters are those who can lay bare the secret, inner heresies of even the most strong-willed of men. Some use the psyker’s arts to tear guilt from the hidden recesses of the mind, leaving nothing but blasted pulp behind; others are masters of the countless ways man can incriminate himself. Many Witch Hunters are also infamously schooled in the dark arts of torture and can use them to extract a confession even from the most unwilling subject. Where there is an enemy hiding within, the fires of the Ordo Hereticus are ready to burn and purify.

“He who allows the alien to live shares in the crime of its existence.”

The Alien Hunters of the Ordo Xenos and their servants focus their attention on combatting the numerous threats to Mankind’s dominion over the galaxy. They are masters at hunting down inhuman species and detecting them when they seek to infest the Imperium. They study the spread of xenos empires advancing across the stars themselves and marshal the armies of man to oppose such expansion. They breach tombs constructed before humanity even evolved, seeking out and destroying slumbering enemies before they can awaken. They seek the taint of the xenos at levels other men cannot even perceive, such as the genetic and the psychic, for the alien has countless means of attacking, enslaving, and preying upon Mankind.

The Ordo Xenos is ever vigilant for alien invasion or incursion from any quarter, even from outside the galaxy. Some races sleep beneath the cities of Man, awaiting some pre-coded signal or portent to rise up and retake the world of their birth. Others lurk in the depths of planets long settled by humanity, only occasionally preying upon the intruders. Some occupy worlds seemingly devoid of recognisable life, while a few exist in other dimensions, feeding and breeding before vanishing with only befouled corpses in their wake. The alien also threatens through its very inhuman existence, twisting men through perverse philosophies or mechanisms.

There is endless variety to the xenos, each one an abomination to humanity and a threat to be eliminated lest Mankind’s rightful rule over the galaxy be thwarted. There can be no rest against this threat, no negotiation or peace with inhuman races. Wherever the alien dares exist, the fists of the Ordo Xenos, backed with the righteous strength of humanity, ensure none survive. 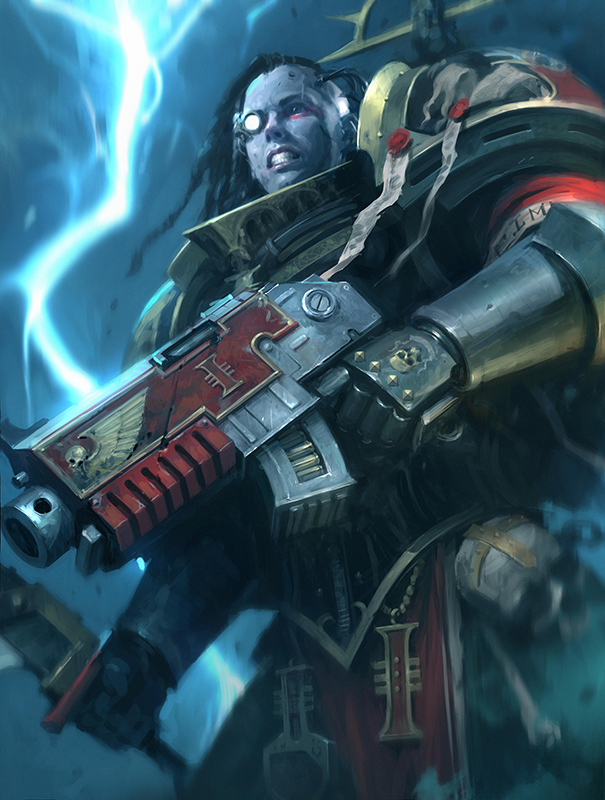 “The daemonic are without number, and their legions span the galaxy. But faith does not tire. Should it take us an eternity, the Ordo Malleus will find and exterminate them all.”

It is the task of the Ordo Malleus to hunt and combat Daemons. They guard against attempts by men to tap into the power of the Warp, and to combat the forces of the Warp when they attempt to break through from the Realm of Chaos. Most men have no idea of the awful truth of the existence of the Warp, never knowing that travel to other stars requires passage through that hellish realm. Preachers in hive parishes warn of the consequences of evil deeds and admonish those who would have truck with evil powers, without any true understanding of the horrors they speak of. Missionaries on pilgrim transports beseech their shipmates to raise their prayers during travel between the stars to assure safe passage, but are ignorant of the denizens outside their vessels hungrily eyeing their souls. The Ordo Malleus knows these truths and more, for they are the Daemonhunters and know what menaces lurk in the Warp as well as how to fight them.

To belong to the Ordo Malleus is to bear the same soulshattering, sanity-searing knowledge that is held within the many accursed tomes of those who worship or utilise the unholy power of the Warp. It is to stand against beings that cause the very fabric of reality to bleed in agony at the affront they hold against nature. They must match mortal flesh against Immaterium, against raw emotion spun into nightmares that walk the weeping earth. Light itself shatters on the Daemon, their forms burning retinal scars even through closed eyes. To those with their souls unwarded against the corruption of the Warp, reading the secret name of a Daemon is to rip the thin veil of reality asunder and call that thing into terrible existence, a folly that can only result in the immediate death of the summoner and the subsequent damnation of his soul. Yet the Daemonhunters do this and more; but for their struggle, the Ruinous Powers would surely conquer humanity and feast on its souls for all eternity.

The Daemonhunters fight an impossible war of terrible stakes. A single nascent psyker can unleash the Ordo Malleus’s foes in a moment of weakness, wiping out entire populations. Using an unearthed manuscript, a cult might open a gateway allowing creatures to pour forth in a tide of corrupting filth, poisoning an entire world. Against these threats and more, the hammer of the Ordo Malleus is raised, prepared to smite the Daemon back to its foul realm. 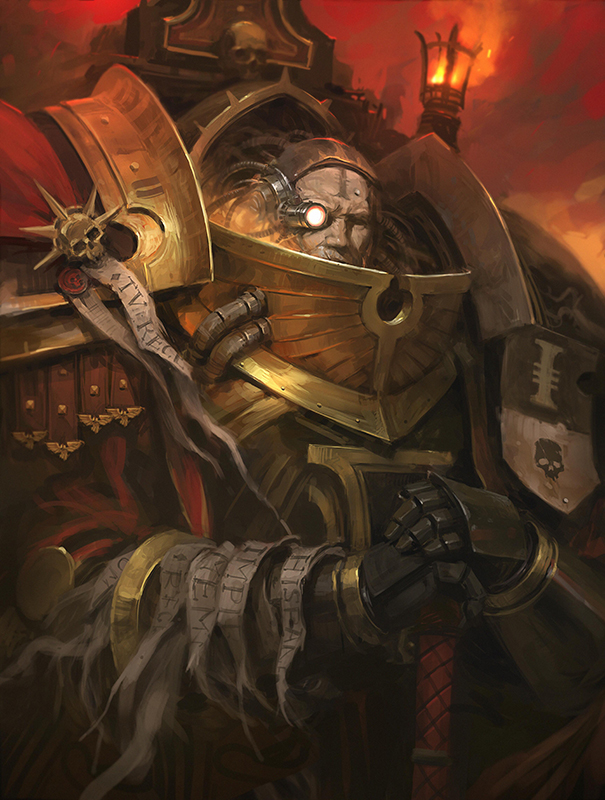 “His loyalty couldn't be bought at any price, but it could be rented remarkably cheaply.”

Most of the time Inquisition and Rogue Traders do not intersect, as both institutions have their own responsibilities and tasks at hand.
But not always. Sometimes a particular Inquisitor can request a helping hand from a Rogue Trader who was unfortunate enough to be nearby.

Some members of the Inquisition can get a Warrant of Trade themselves. The most likely reason this might occur is as a result of political manoeuvring within the Inquisition itself, perhaps resulting in the outmanoeuvred individual being offered the Warrant as an alternative to a far less desirable outcome.

Still, many in the Inquisition would take to marking the Rogue Trader out as an outright heretic from the start, as history knows many Renegade Noble Houses who were hunted down by the Ordo Hereticus.

So while the Interrogator of Holy Ordos is boarding our voidship we must ask the main question, Lord-Captain.
What is your relationship with the Inquisition going to look like?