Jae Heydari: Of Cunning and Ambition

The light of the Emperor – may His grace rest upon His abject servants – is a most radiant light; yet the brighter it shines, the denser is the dark swarming of shadows at the edges of His vast Empire. There, in that twilight, dwell the most pathetic dregs of society. Smugglers, thieves, murderers, they crawl about like so many insects; they huddle together one moment and tear at each other’s throats the next – for their eyes cannot see the truth, and their hearts are filled with only rancour and avarice. But even out of this riffraff, there have risen a bold and persistent few who are willing, for an immodest price, to venture forth and fetch treasures that the poor of heart would dare not touch. These scoundrels living outside the confines of Imperial law are known as Cold Traders.

There are some who will happily let the foundations of whole worlds come crashing down for a chance to live on their own terms and not take orders from the soulless machine that is the Imperium. They have their own path to follow, a relentlessly upward path. They climb over the heads of their less nimble-fingered, less sweet-spoken rivals. They test their luck again and again. They make questionable alliances and sell away their souls, one shard or shred at a time, for the tiniest of opportunities. Eventually, after years, they may reach the gates of freedom. Or they may not – if they have shied away from delving neck-deep into xenoheresy; if they have hesitated to put anything and everything at stake, from their silken underthings to their very lives. Once you’ve been branded a criminal and a lowlife, being less than the best of them is not an option.

Jae Heydari, a precious jewel of Footfall, a link in the glittering gold chain that is the Kasballica Mission among Cold Traders, a woman of countless talents and myriad mysteries, is truly the cream of the scum of the Koronus Expanse. A seasoned dealmaker and adept mediator of commerce with the enemies of Humanity, Jae has earned the great respect of many in the Footfall underworld and incurred the much, much greater hatred of her less successful rivals. Jae will not pass up any opportunity to curb the evil tongues of her enemies and keep their long knives at bay. And a Rogue Trader’s influence is her most coveted weapon – for who would dare go against the business partner of one who holds a Warrant of Trade, the gracious one anointed by the Emperor, and sent Jae Heydari’s way by providence itself? That is, of course, if the Rogue Trader chooses to add a person of such controversial repute to their retinue.

At the Rogue Trader’s side, Jae will set out toward the distant shimmering stars that hold innumerable riches and are home to multitudes of foes. Notwithstanding her extensive knowledge of all the various things falling under the concept of “xenoheresy,” notwithstanding a honeyed eloquence that can pacify a raging daemon, Jae is hardly the kind of partner whose honesty and integrity warrant any superlatives. Dark shadows from the past can be glimpsed in her eyes, and reflections upon her future are like glints of light dancing upon cold steel. In the end, it will be up to the Lord Captain – may the God-Emperor shield them from all adversity – whether to entrust this lady with their business affairs, their money, and ultimately their life. 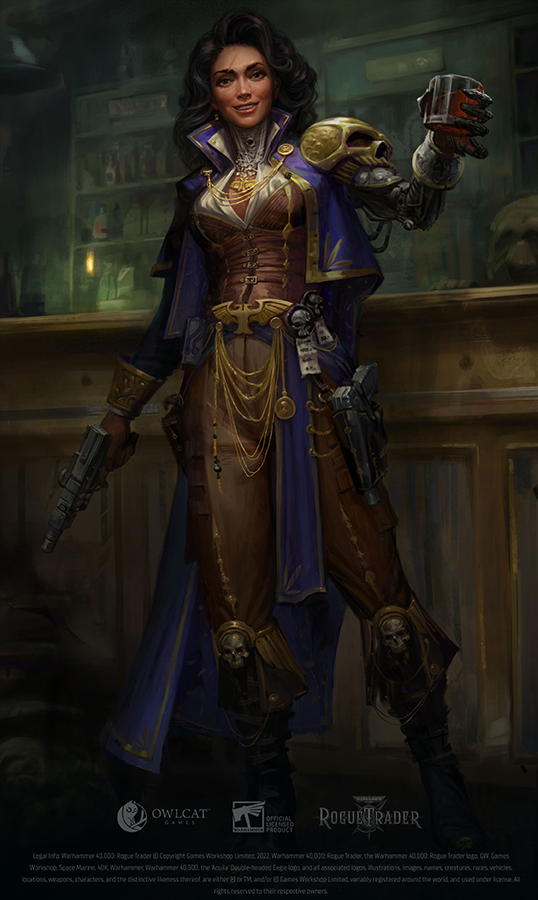