Rogue Traders fear little. Their unbelievable wealth and unquestioned might ensure their will is always respected and their goals always reached. Yet there is but one power that stands above them – the power called the Holy Orders of the Emperor's Inquisition, whose only purpose is to identify and destroy the vilest of threats to the Imperium of Man. Agents of the Golden Throne are wary of Rogue Traders, whose overconfidence and lack of restraint could lead to damnation and, consequently, to unimaginable ruin. So grave is this concern that a cautious Inquisitor may deem it necessary to post one of his own on board the voidship of an especially recalcitrant Rogue Trader – to watch and to assess in order to either respectfully usher the lost ship back into the fold or mercilessly cull the heretic if they are deemed hopeless.

Interrogator Heinrix van Calox is a sanctioned psyker – a living weapon of the Inquisition, an example of the vile power of the warp, bound and controlled by the vigorous training and unbending will of the man himself. Many twists and turns of fate brought van Calox from his Knight world home to the service of the Ordo Xenos, with his diverse specialties and formidable psychic powers making him indispensable in the eyes of his pre-eminent mentor. It is this high-standing and powerful individual who set Heinrix on a mission of his own – one that eventually led the Interrogator to meet the Rogue Trader.

While Heinrix is focused on the Inquisition’s goals in the Koronus Expanse, the sudden task of joining the retinue of the almighty Lord Captain will prove a challenge of its own. After all, the mere sight of the crowd around a privileged Rogue Trader can make any loyal Imperial agent’s blood boil, let alone the arduous task of tolerating heretics and xenos by one’s side day after day. Still, there is something important about this particular Rogue Trader, something that urges the Inquisition to stay the hand of judgement and forces van Calox to endure more than his fair share of questionable decisions from the Lord Captain.

The Interrogator may have his doubts about the situation, but for now he hides them behind his respectful yet cold demeanour. After all, his main purpose on this very voidship is to watch and see whether this remarkable show of trust will prove fruitful. For if the Rogue Trader ends up worth the travail, they could prove to be the Inquisition’s most useful asset in the Koronus Expanse. Otherwise, the Lord Captain might soon discover that van Calox’s mask of noble politeness and dutiful deference is but a shackle on the psychic storm ready to be unleashed upon the heads of the unworthy. 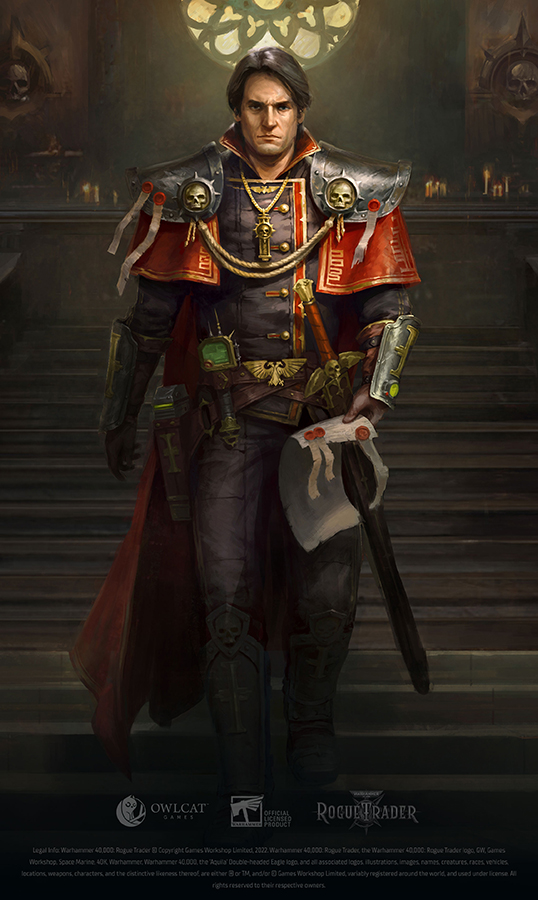