Drukhari and their society

“The Drukhari see the other inhabitants of the Galaxy as little more than cattle, livestock that can be brought to bay or slaughtered at any time. Their fodder, however, is not meat and muscle, but the anguish and despair of the weak.”

The Drukhari that feed on the suffering of others are the darkest branch of Aeldari, an ancient and technologically advanced race. Their ancestors ruled the stars long before Mankind first ventured outward from Terra, and over long millennia the ennui of their vast lifespans led them to ever greater acts of depravity and violence. Now, from the vast nightmare city of Commorragh nestled in the black heart of the Webway, the Drukhari launch their raids on the worlds of realspace, slaughtering to sustain their withered souls and gathering up terrified victims to take back to their morbid torture chambers.

Commorragh lies in the depths of the Webway, named by many in fearful whispers as the Dark City. Commorragh is to the greatest megalopolises of realspace as a soaring mountain is to a mound of termites. Its dimensions would be considered impossible if they could be read by conventional means, its population greater than that of whole star systems. Although called a city, Commorragh is more akin to a vast collection of satellite realms linked by myriad portals and hidden pathways, its far-flung nodes spread throughout the arteries of the Webway like a malevolent virus. While inside that Labyrinth dimension the gap between each sub-realm can be crossed with a single step, Commorragh’s clustered concentrations are in reality scattered across the galaxy, in some cases thousands of light-years apart.

Though the Dark City is a self-contained realm, hidden from the eyes of those outside the Webway, the Drukhari have a constant need to send their warriors on campaigns of slaughter. Only by launching massed raids across the galaxy can they feed their insatiable hunger for suffering, and secure the prisoners and resources that allow Commorragh to thrive.

To the sadistic Drukhari, the sweet fruit of horror is as pleasing as the caress of a razored blade across soft flesh. They relish breaking the bodies of their captives. Still, they prize even more highly the process of crushing their victims’ spirits, for nothing is more gratifying to the denizens of the Dark City than securing utter dominion over those who have resisted them. They drink in every nuance of woe until their captives gibber and plead for death – mercy the Drukhari are famously slow to grant.
The warriors of the Drukhari are tall and lithe without exception. Their alabaster skin is almost corpse-like in its pallor, for there is no true sunlight within their shadowy realm. Their athletic physiques are lined with whipcord muscle, honed and enhanced until they are superior even to those of their craftworld cousins — the Asuryani — for the warriors of Commorragh prize martial prowess most highly. But their magnificence is only skin deep — viewed with the witch-sight, Drukhari are repugnant monsters, eternally thirsting for the anguish of others in order to fill the aching void at their core. 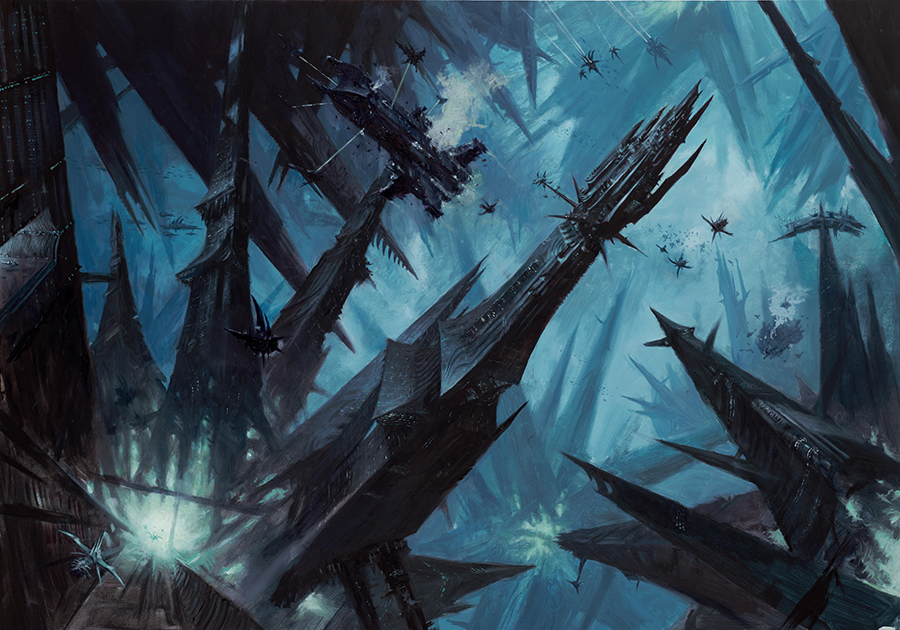 “You think to challenge me, pitiful human? I, the bane of empires, the father of pain. Let me educate you; I need a new pet…”

Archon K'shaic of the Kabal of the Bladed Lotus

In a society as treacherous as that of the Drukhari, a single power-hungry individual soon makes enemies. It is never long before the loner finds a dagger at their throat or feels nerve-searing poison flowing through their veins. Only those affiliated with Kabals enjoy any degree of security; there is safety in numbers, they say, and even in the shadow-haunted twilight realms of the Dark City this remains true. To kill a Kabalite is to commit a hostile action against their entire Kabal. Regardless of status, sect, or species, few Commorrites are prepared to make such an influential enemy without good reason, and those who do must ensure they have powerful friends of their own to protect them against the inevitable retribution.

Competition for Kabalite membership is beyond fierce, despite the varied and often violent initiation rites that must be undergone. The constant supply of fresh aspirants means that the Kabals themselves enjoy a kind of loose immortality. Each has the might to make its displeasure keenly felt should it be threatened or slighted. 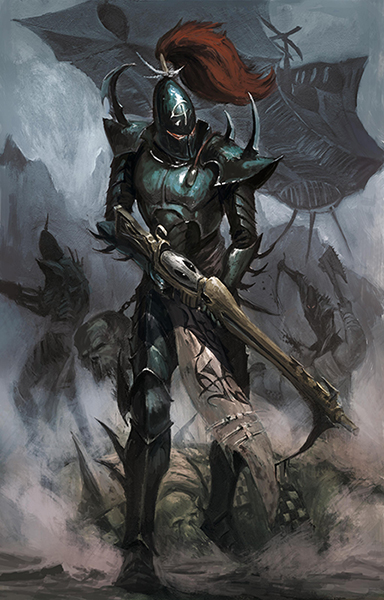 “I stand proudly, here on the stage of the battle, and I welcome all challengers. Do you hear through your thick walls the sounds of your dying comrades? Their pained wails are a thing of beauty, and will accompany me when I leave this place.”

Commorragh exists in a delicate but well-established balance. Its citizens would gladly stab each other in the back just for the looks on their victims’ faces, for to witness another’s anguish is the only way the Drukhari have left to feed their withered souls. Yet for the ruling Archons of Commorragh to allow the natural bloodthirst of their kin to go unchecked would be to invite catastrophic civil war.
Because of their kind’s unending need to bathe in murderous sensations, the Drukhari have evolved the Hekatarii, known in common parlance as the Wych Cults. Each Wych Cult is a thousands-strong organization of gladiators that put on frequent displays of the most incredible brutality — not only for the edification of the masses but also for their literal sustenance. Such is the scale of the carnage staged by these armies of warrior-athletes that their audiences leave the arena with the glow of well-fed predators. In this way, the populace is kept from full-scale anarchy — at least, those residents of Commorragh wealthy enough to attend the Wych Cults’ nightly performances. 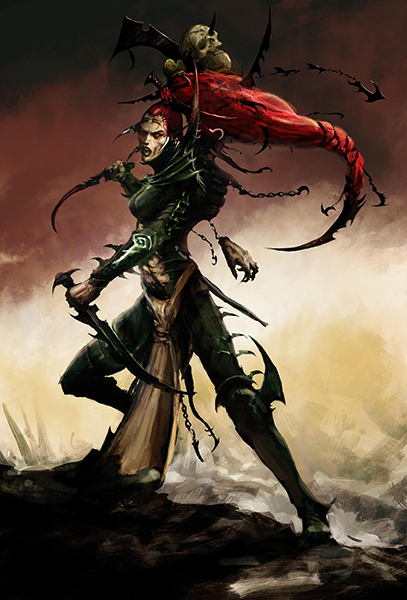 A blade to the chest? How pedestrian. We left behind such base concepts long ago, dear heart. Let me introduce you to a far more interesting demise…’
Haemogarch Vant–his, Necromaester of the Dark Creed

The Haemonculi deal in body modification, drug distillation, and beauty elixirs. However, the true source of their power lies elsewhere. Every member of Commorrite society must eventually ask for their help, for the Haemonculi are masters of the flesh, be they alive or dead. Those of a like mind gather together into Covens, and each Coven occupies a vast demesne of cells and laboratories under the core of Commoragh . Here these diabolical figures slice and meld the flesh of those that fall into their clutches, savouring their pain as a gourmet would savour a fine meal.

To the Haemonculi, each foray into realspace is not so much an act of war as an exhibition of their talents. Members of a Coven will compete to create the most pleasingly abhorrent monstrosities in the lead-up to a raid, releasing them upon the foe and watching the results with interest. The Haemonculi consider such competition inspiring, and will offer a heartfelt compliment should their rivals’ creations achieve some especially impressive act of violence. 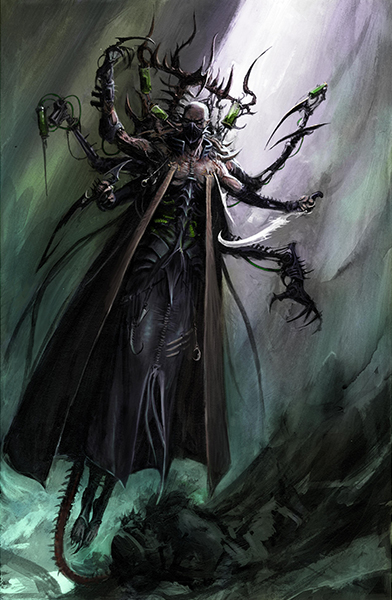 A Talent For Murder

Countless generations of conflict have ensured the Drukhari’s bodies are even more suited to physical combat than other elements of the Aeldari race, the innate psychic abilities possessed by their forebears have, by necessity, been allowed to atrophy. To channel the energies of the warp within the Dark City would be to invite disaster, for doing so could draw the gaze of the Chaos God Slaanesh, the one the Aeldari fearfully call ‘She Who Thirsts.’ As such, the use of psychic powers is one of the few things forbidden in Commorragh.

Still, collectively, the warriors of Commorragh know all the ways there are to kill the galaxy’s myriad creatures, and delight in perfecting as many as they can.

And soon, mon-keigh, you shall experience it firsthand.

“Spawned in the darkest pits of the universe, the piratical Aeldari are a curse upon all races of the galaxy. For untold thousands of years they have preyed upon us, stealing forth from the shadows and dark places on their raids of terror and violence; massacring or capturing all whose paths they cross. That they are utterly evil and inhuman is without question.”