Warhammer 40000: Rogue Trader is a turn-based сRPG set in the grim darkness of the far future. You are a Rogue Trader, one of the few truly unique individuals in the Imperium of Man, a galaxy-spanning human civilization living through a dark age of eternal warfare and terror, besieged from all sides by xenos, heretics, and existential horrors.

A combination of an explorer, voidfaring merchant, and a powerful feudal lord, you operate on the fringes of known space, moving freely across the Imperium and beyond, standing far above most of the laws and limitations of the Imperium.

The Alpha starts in Act 2, after the events of the prologue, where your predecessor, Theodora von Valancius, has died, leaving you as the new leader of the dynasty. You’ve inherited her voidship (simultaneously a mighty space fortress, a cathedral, and a factory - home to thousands of people) and her trade empire.

Once you’ve launched the game, click “Start a new game”. You will be offered to select the difficulty, portrait, and the gender of your character. If you are not familiar with other games of this genre, we advise picking Normal difficulty. 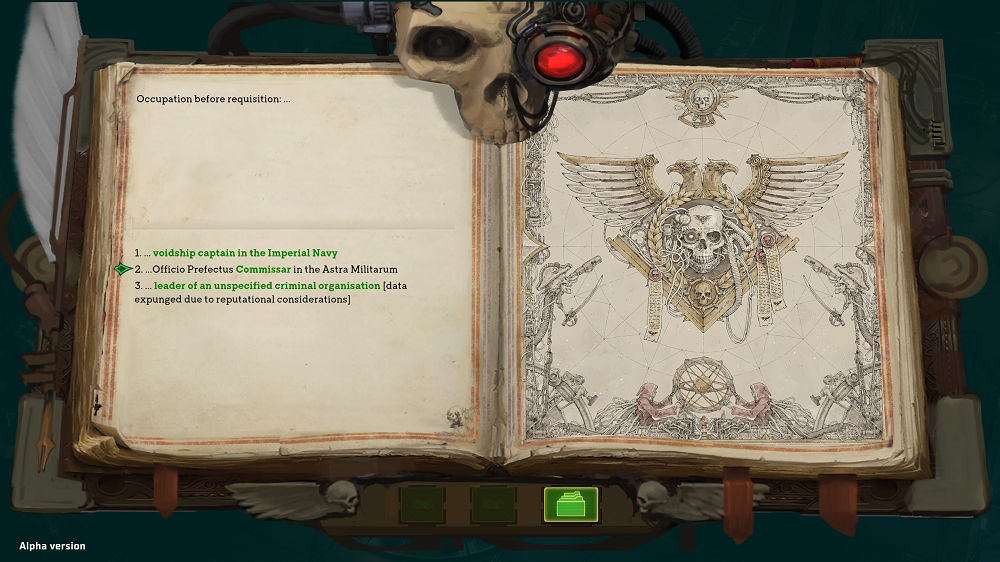 The first thing you’ll see in the game will be a book event screen, allowing you to select the specifics of your background. This is a temporary substitute for a proper character generation screen which will be available later. Choices made here determine your starting set of stats and skills. Hover over choices to see more details.

After character creation, you will have a short conversation with your officers, and then will be allowed to explore your voidship’s bridge and captain’s quarters, talking freely to your officers and companions.

When you’ve finished exploring, it is time to get to your first quest - to repair the ship damaged in the encounter that led to the death of your predecessor.

To start, click the icon over the table with a big glowing green globe, located in the middle of the bridge. This will take you to the system map.

Then, left-click your first destination - Footfall, a void station in the asteroid belt, one of the main trade hubs of the Koronus Expanse.

Your ship will move there, letting you disembark at the station’s docks. Good luck!

Ground combat in the game is turn-based and expects you to use a lot of abilities. 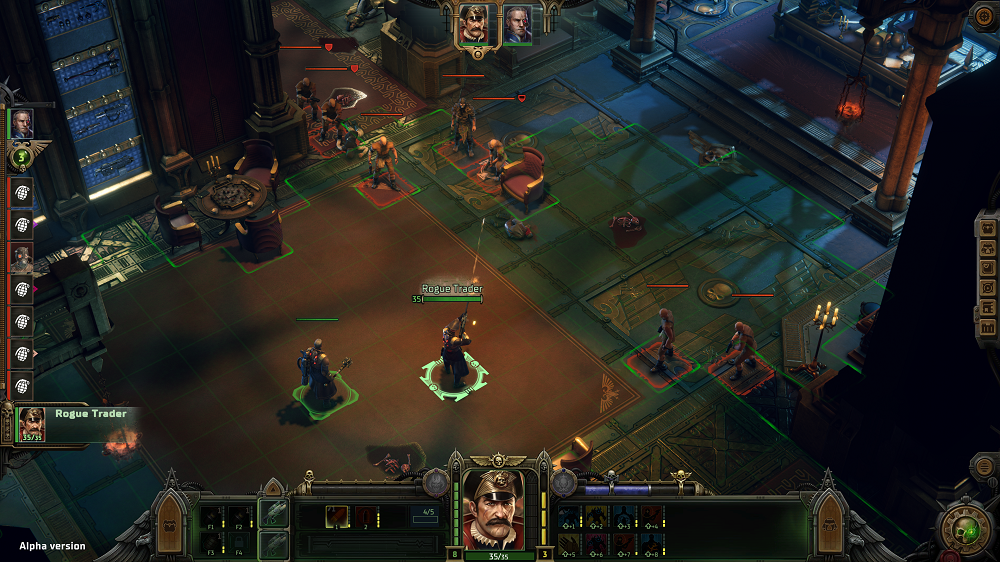 Things to know about ground combat: 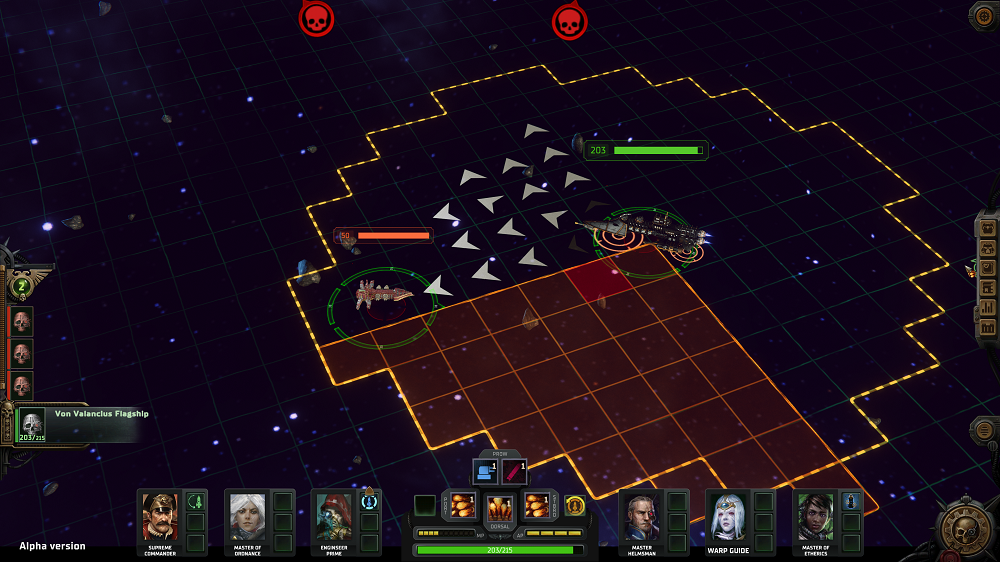 At the beginning of the alpha your main character already has 6 companions. Over the course of the alpha, you will be able to get 2 more. It is possible for the companions to die in certain story situations, so be careful about your choices, or you may have to fight with fewer numbers. 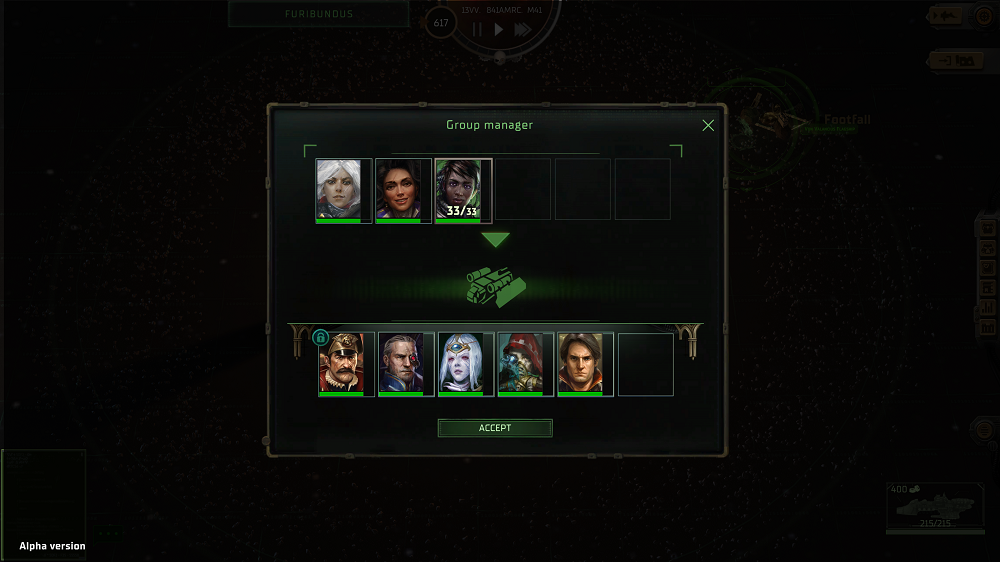 Your starting companions are: 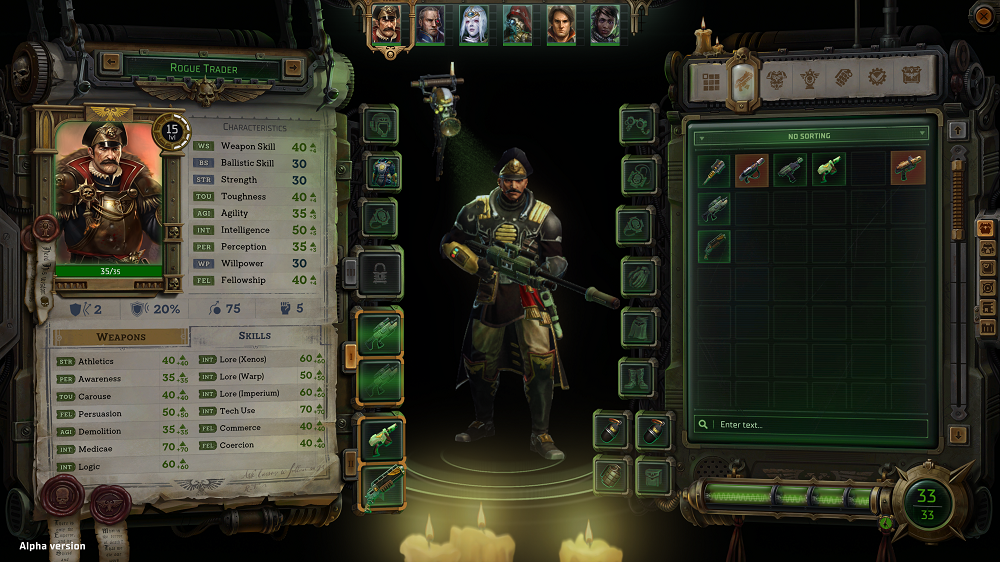 Can be melee and ranged. They have the following stats:

Has the following stats:

Grenades, medikits, and other items that go into special slots. Currently, there are only 4 of these slots, but more will be available later. Some items may have limitations on their use, that may (or may not, don’t forget - this is an alpha!) be reflected in the tooltips - only Aeldari can equip Aeldari armour, for example.

Cloaks, rings, etc. You equip these in the appropriate slots and get various bonuses. 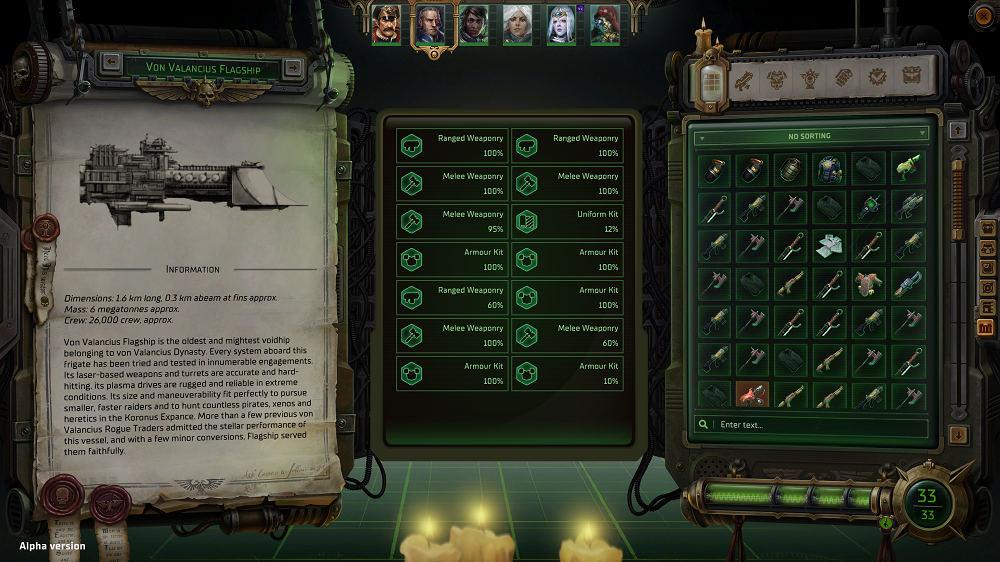 Besides the traditional RPG inventory for your character, there’s a special type of inventory called cargo, representing the storage vaults of your ship. You can’t directly sell items to a vendor, but can sell cargo containers.

Almost all items can be put into cargo. You can summon the cargo screen by pressing B or clicking the appropriate button in the UI. To put an item into cargo, you need to drag and drop it from inventory to the cargo screen. You can later drag the item back to your inventory in the same fashion.

Any cargo filled to 100% can be sold to a vendor of the appropriate faction for Reputation Points. These can be used later for buying items and gear. Current reputation points can be seen in the Reputation tab in the character screen.

Some cargo may only be received via exploration or colonisation.

Profit Factor (PF) is a relative measure of your character’s wealth, representing their assets, connections, and resources, available at the given moment. You start with PF capped at 30. When you use PF, you don’t lose it forever - it is temporarily blocked and slowly regenerates up to the cap over time. The cap can be increased or decreased as you progress through the story, explore, and colonise.
Note that Profit Factor cap may influence the story - for example, an exceptionally rich Rogue Trader may have new dialogue options.

Stats and Levelling Up 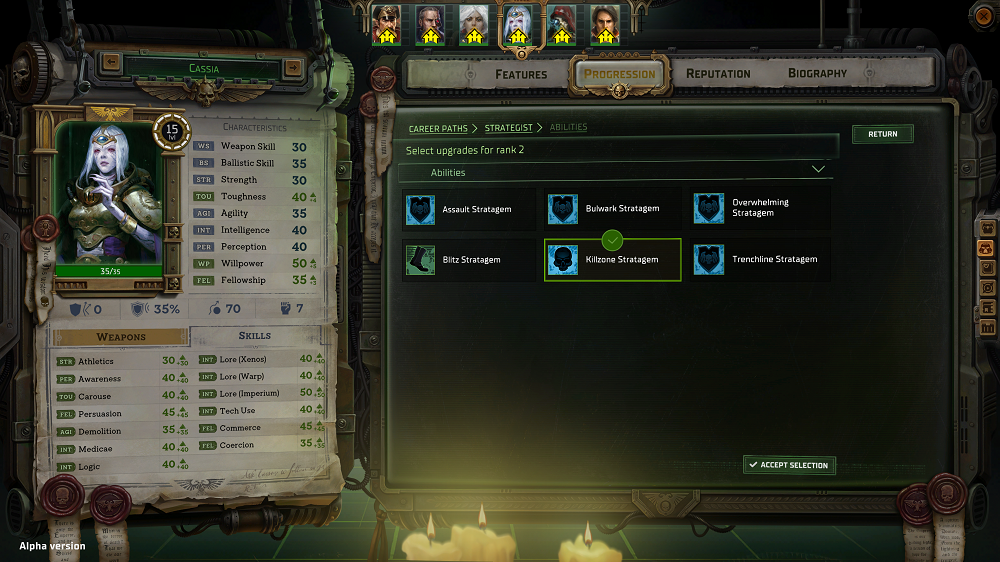 The game uses a d100 system where you need to roll the value of a stat (with any available bonuses) or below to successfully pass a check.

These are the stats:

Note that the current levelling system in Alpha is incomplete. It will see a lot of upgrades in future. Similar to any other RPG, you gain experience for successfully completing quests, killing enemies, and passing skill checks.

Careers are the ‘classes’ in Rogue Trader. Currently there are 8 of them available:

After you complete a basic career, you may choose an advanced one.

In Alpha, you start on level 15 with an already completed basic career, so you get to pick an advanced one after your first level up. We recommend you to have at least one representative of each career in the party. Every time you level up, you will pick one of multiple abilities, skills, or stat upgrades. Note that only part of all the careers, skills, and abilities are available in the alpha.

In non-combat applications, you will often see the use of: 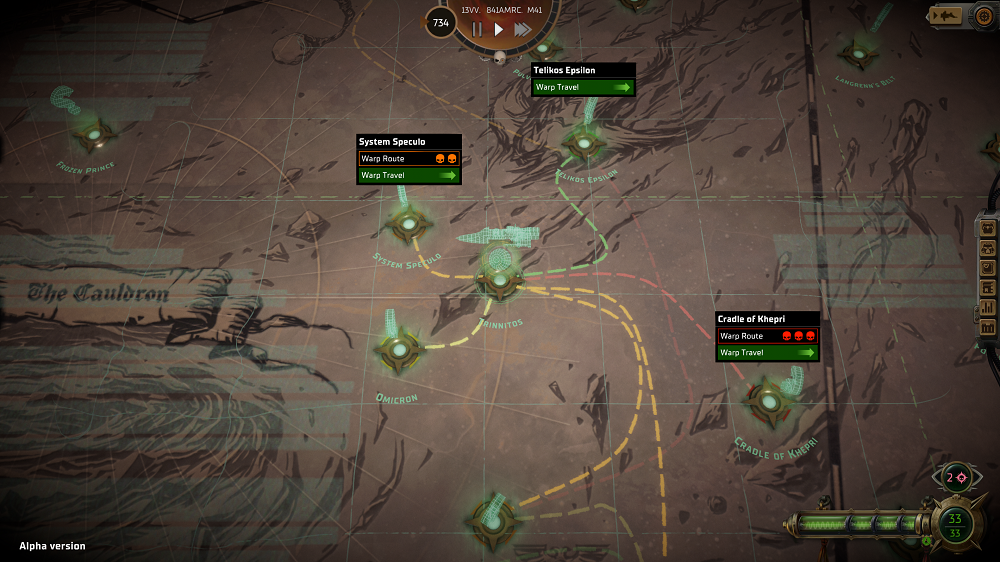 After leaving Footfall, you will be able to enter the global map. By clicking the scan button near the ship, you can scan possible routes and select destinations. Green routes are safe, the closer the colour is to red - the more dangerous that route is. Click the route to use it.

You have a special resource called Navigator’s Insight. You get it from scans, and it allows you to reduce the difficulty of a selected route or even create new routes. To make a new route, click a system which lacks a route to the system you are currently in, and click the option to make a new route using this resource. 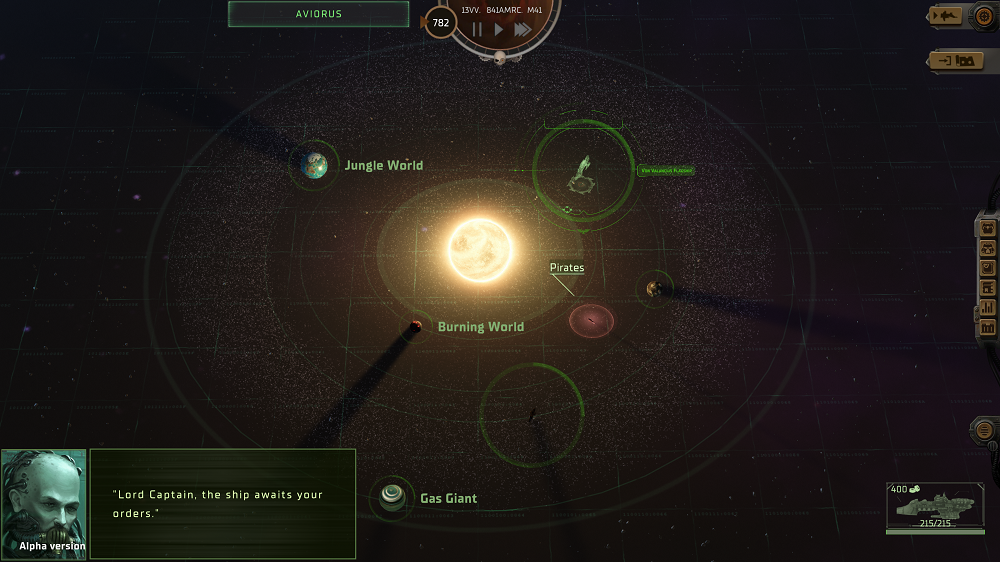 Star system map visuals are in an early draft and will change later. Currently, it is impossible to move the camera or zoom in or out of the system map. You can move your ship by clicking on objects in the system and scanning them for resources, locations to visit, and various events. Some objects, such as pirate ships, may attack you if you get close.

There’s an Adeptus Mechanicus vendor on Footfall, which will exchange data from scanned planets (in packs of 10) for Scrap and Profit Factor. 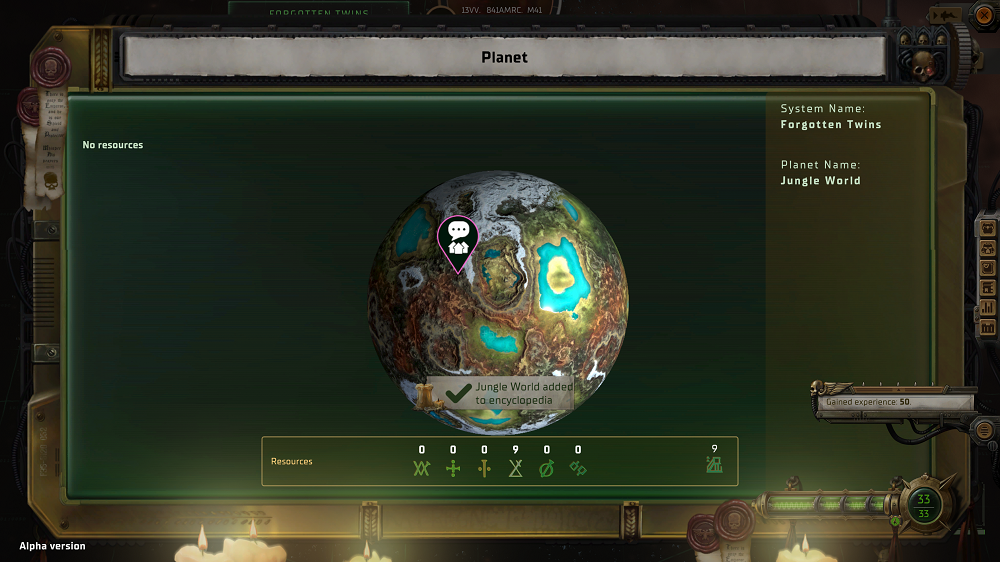 You start with no colonies. In the alpha, you may find a spot for one additional colony and regain control over two existing colonies of your trade empire. Some planets produce resources, which you will need to mine using mobile extractors (you can get them during some quests or buy them at Footfall). You may require those resources to fulfil orders from the colonies (a tab in the quest journal) or launch certain projects.

Every colony has 3 stages of development (more of them will be added later) with unique rewards for completing them. You can control the colonies remotely by opening the colony management screen available from the global map screen in the bottom right corner.

Rumours are a specific quest type. You can’t directly ‘complete’ them - they may, or may not be true - the only way to find out is to visit the location and check them. Sometimes you may even hear rumours about yourself and react to them in dialogues. 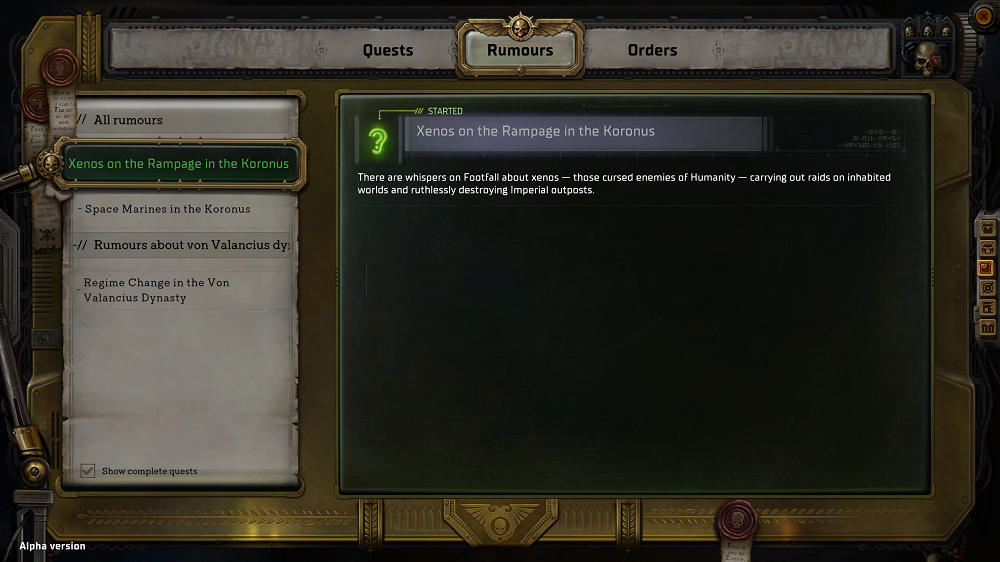 Everything. When you see something that clearly doesn’t function as intended, press ALT+B and describe the issue as thoroughly as you can. It helps to know what you have been doing before the issue popped up. If something works, but works in a way you dislike or find uncomfortable - let us know too! Don’t forget to pay attention to sound and music as well.

In roughly a week after the launch of the alpha, a big survey will be available to share your initial impressions. We will be very grateful if you participate in it after you finish the alpha! Your feedback is very important for us.